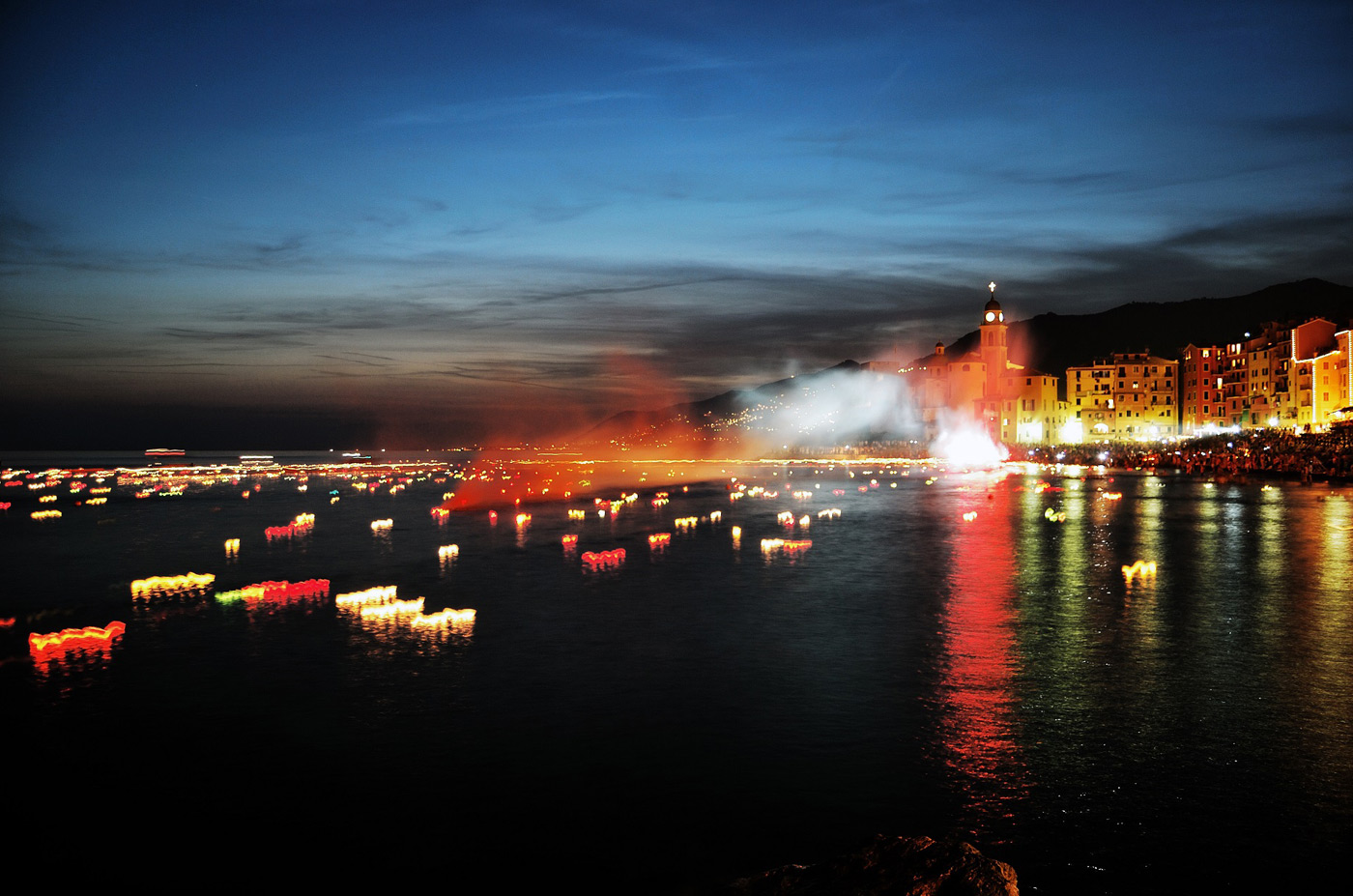 Thousands of lights that bright the sea of Camogli like stars fallen from the sky. They are in reality small tea lights, wrapped in thin coloured paper that together with the real starlight create a magic atmosphere. This beautiful marvelous sight occur every year in honor of Stella Maris’ Madonna, Protector of the sailors.

It is the feast of Camogli’s Stella Maris, a tribute to Virgin Mary that take place in the very heart of the town and also in the nearer village of Punta Chiappa, every first Sunday of August_ this year will be on the 6th August_ from 1924.

At that time Don Nicolò Lavarello, Chapelain of San Nicolò di Capodimonte Church, decided to restore the statue of the Madonna, which was set for a very long time in a newspaper kiosk on the “Punta” of the promontory.

And so it was organized a procession of boats that departing from the harbour of Camogli, escorted back to the “Punta” promontory the statue of the Madonna “Stella del Mare”.

From that day onwards the procession is been repeated every years.

Even if the worship of Stella Maris is probably much older: we must come back to the XV century when the town’s fishermen started to pray the Madonna in order to curry favor for a safe sail and a generous fishing.

The Madonna of Stella Maris has a dedicated altar, located on the Promontory of Punta Chiappa and also a painting that is collocated in Camogli’s Church.

Since when the feast became official a greater number of believers have come to the city to join it, coming also from the closer towns on board their own boats. Today it is still as in that period: Stella Maris is a very cherished feast, it is in the heart of seafaring people and his charm lure many visitors.

Although the laying of the tea lights on the sea is the most scenographic and probably the most common picture of the feast, the whole day is actually dedicated to this celebration.

Starting from 10 am from Camogli it departures a procession of different kinds of boats all adorned for the occasion.

All the boats sail to Punta Chiappa following U Dragün, the historical vessel that made Camogli famous all around the world for his participation in many challenging crossings.

It is named after the Dragonara Castle a fortification built as protection for the town. It was assembled by the hands of the “Maestro d’Ascia” ( a craftsman) Ido Battistoni that created this beautiful vessel from an old skiff.

From that old skiff it was built a proper ship of eleven meters length with two sails and twelve oars. The Dragün is actually a Sciabecco, an ancient pirate vessel.

From 1969 the ship is the protagonist of Stella Maris event, in fact on board the Dragün there is the priest who celebrate mess out in the open at 11 pm.

In the evening the appointment is at 8.30 on the seaside of Rio Gentile and Rio Giorgio for leaving on the water your own colorful tea light.

← Cinque Terre, hanging between the sky and the sea.