Manarola and its Nativity Scene 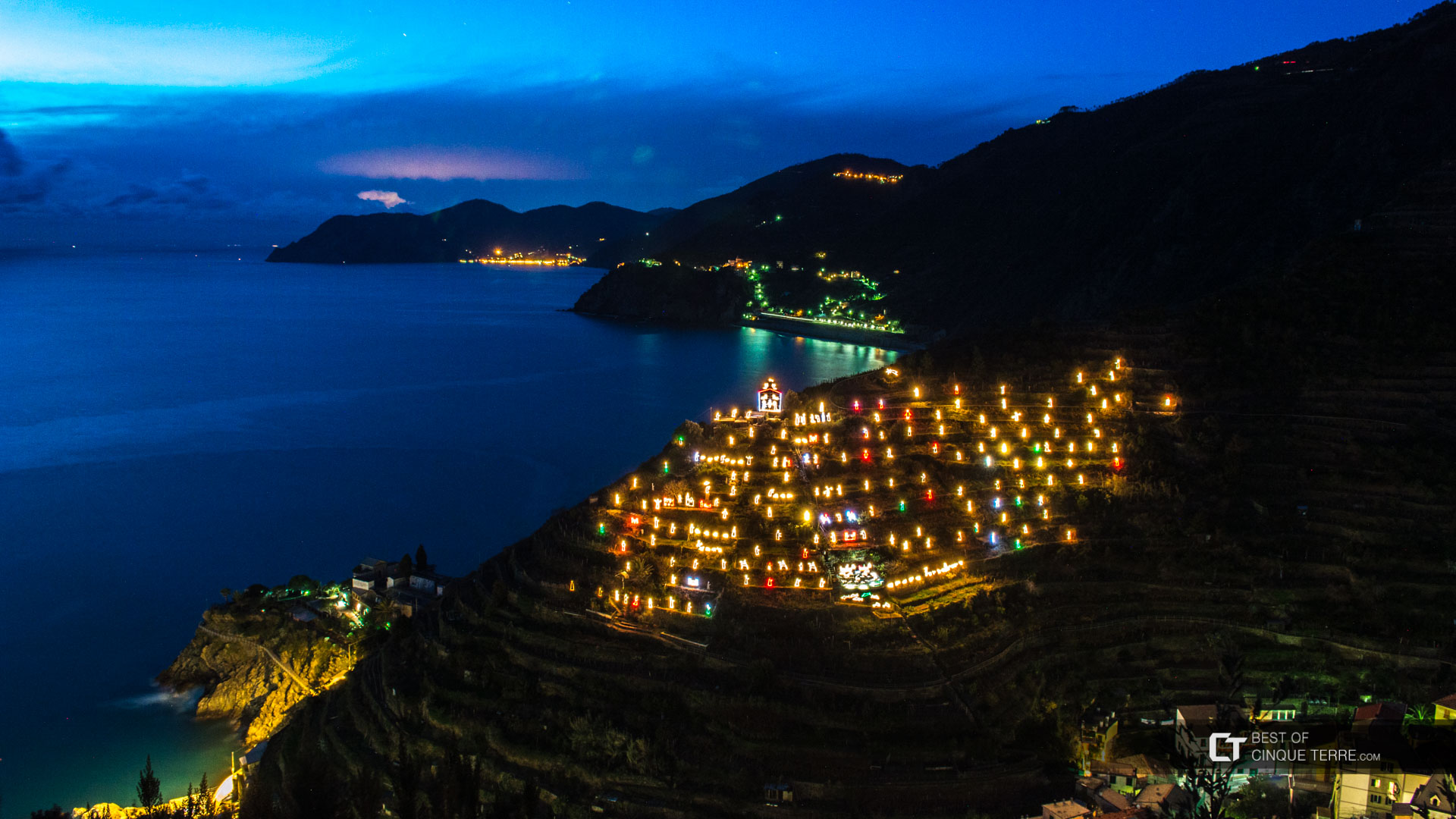 The hamlet of Manarola it is surrounded by hills with the typical Ligurian vineyard plantation on terrace. The sun sets and disappear behind them. In winter the darkness closes in very early. But from December 8th day of the Christian feast of the Immaculate Conception, up to the end of January, this Cinque Terre’s hamlet bright up in the evening. Plunging in a magical atmosphere that is created from 300 figures natural size and illuminated with almost 17 thousands lights laying across the Tre Croci hill. This is Manarola’s Presepe (Nativity Scene) that makes special Christmas in Cinque Terre from many years, in fact is one of the most famous in the world. The moment when the lights are turned on it is a the pride and joy of the whole community. For the inhabitants this is the nativity scene of Mario Andreoli, their fellow countryman, that tirelessly continues since 1976 to dedicate himself to its creation making it unique and special. For a very long time he has been dreaming of realizing something unique: a masterpiece that no one had never seen before. And so, little by little, using recyclable materials and retwisted iron he assembled the parts of its characters and put them on the hill. There are shepherds, artisans, sheep, and even boats with fishes, because this scene is above all a tribute to the five marine villages.

As well as any other citizen of Cinque Terre, Mario, railway employee now in retirement, knows the strain of hiking up the hills, passing through the small, harsh paths. This has not stop him or dissuade him, on the contrary he said afterwards that each time he placed a figure he climb down to San Lorenzo’s Church Square to see if it worked in the composition. This is what he has been doing for every new character until he was satisfy with the result.

After 30 years from the start of the project, in 2006, the presepe has been introduced and immediately insert in the Guinness World Record the next year. To light it up it has been necessary to use 8 kilometers of electric cables. Now the nativity scene has become nature friendly: in 2008 it was realized a photovoltaic system ad hoc to power it. This year as well that 4 thousands square meters of vineyard, neat and trim thanks to the help of the Club Alpino Italiano of La Spezia and to the volunteer of Manarola, have been light up in December 8th. This year there was a new entry: as 2016 was the year of the Jubilee wanted by Pope Francis, Andreoli created a figure that represent the Pope in the act of opening the main door of San Lorenzo’s Cathedral. Once again there was a feast: fireworks and a torchlight procession and many people guided by the Cai arrived in town passing through the ancient paths that were used for the commercial exchanges between the people of Manarola and the people of the Riccò del Golfo’s Valley.

Those who like the adventure can pass through these paths, departing from Val di Vara, or leaving from Riomaggiore, as many have done on that day following the farmers’ paths to reach the hamlet. Alternatively the easiest way to reach Manarola is by train. Coming from Genoa you must descend after Corniglia, if you come from the other direction Manarola is the station after Riomaggiore. From the railway station just after a few minutes’ walk you will arrive in town. A small advice: it is better to leave in the early afternoon to fully appreciate the charm of Manarola and wait for the sunset and the light up of the hill. The Nativity Scene will be light up until the Candelora day, February 2nd . ← Christmas at the seaside _ Christmas in Liguria

The Social Theatre of Camogli →