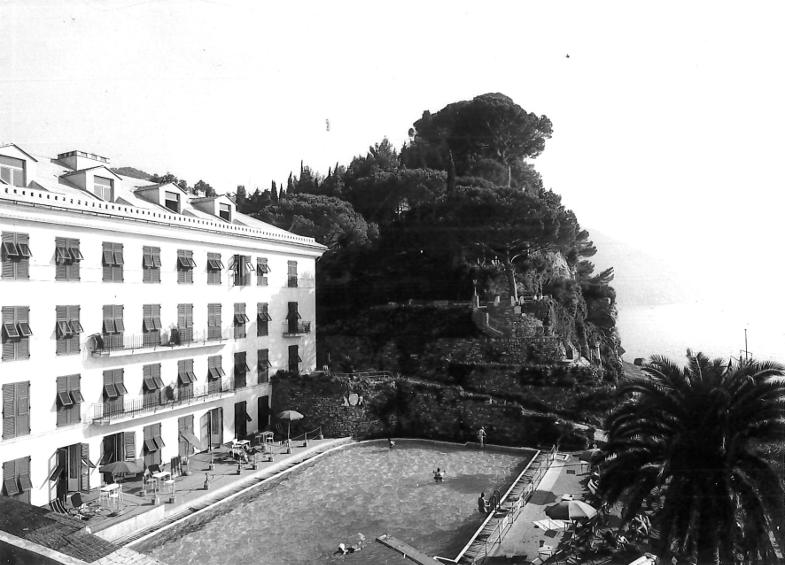 On the coast line of the beautiful fishermen village of Camogli is situated our wonderful Hotel, one of the most elegant of Liguria.
Behind its walls, the history is truly charming.

The Origins of Cenobio dei Dogi

Its history began in 1565.
Dogi’s Family was a noble and powerful family that at the time ruled on a large territory in Italy. They decided to build a Villa on the rocky promontory of the Mountain of Portofino, that they named “Castellaro”. This quickly became their vacation residence, far away from the matters of the Government. Inside the Villa they also built a small but gorgeous Chapel as their guests were normally priests and cardinals; the chapel still exists with all its original features.
For a short period, the Villa was abandoned, when finally, at the end of XVIII century it was inherited to Family Tassari which had connections with Gentile’s Family the last owners. The property was split in two Villas, one on the Castellaro and one on the seaside.
Tassari’s Family occupied the seaside Villa, while the other property was bought by De Ferrari’s Family.
Emilio De Ferrari was a gentleman, nature lover, who came from a noble Ligurian family. He decided to move into the Villa, creating a solid future for his progeny.

The Hotel is born

Some years after, in 1920, Emilio bought the seaside Villa. It was then that he decided to make the Villa into a luxury Hotel, where people from all around the world could find a corner of tranquillity, beauty and elegance under the same roof. Unfortunately, Emilio De Ferrari did not live long enough to see his dream come true. However, his faithful wife Adelia and his son Paolo and his daughter Luciana kept working on it.
In 1956 Hotel Cenobio dei Dogi was born. This is just a small part of the charming history behind our Hotel.

The Hotel Cenobio dei Dogi and Camogli today: the respect and love for the tradition.

The Hotel Cenobio dei Dogi is located on the coast of the Golfo Paradiso, surrounded by a magical park of pine trees and exotic flowers. It is truly a splendid sight to see.
There are many activities for people who love nature: long, peaceful walks through the pine glades and flowery gardens, boat trips to all the little bays around the Ligurian coast and swimming in the crystal-clear waters of the Golfo Paradiso, discovering San Fruttuoso Bay with its ancient Romanic Abbey and then following the coast line up to Portofino. Camogli is famous, not only for the great seamen that passed its way, but also for being one of the most ancient fishing ports in Italy. In fact, the name “Camogli” originates from the phrase “Le case delle mogli” (houses of the wives). It was so called, because the fishermen spent a great deal of time at the sea, leaving the village with wives, children and elderly people only. Even today, little has changed. Camogli still has its fishermen and its traditions.
The Hotel Cenobio de Dogi is really a beautiful place, ideal for young honeymooners, and people who appreciate, peace and beauty.
The Hotel has an excellent International Cuisine, specialized in Ligurian dishes as well, prepared by an expert and efficient staff.
People who want to find relaxation away from the stress of the big city will find the Hotel Cenobio dei Dogi a perfect place to spend an unforgettable vacation, surrounded by the gorgeous Camogli and the everlasting, historical elegance of our Hotel.

A Gourmet Journey across Eastern Liguria →