Cinque Terre, hanging between the sky and the sea. 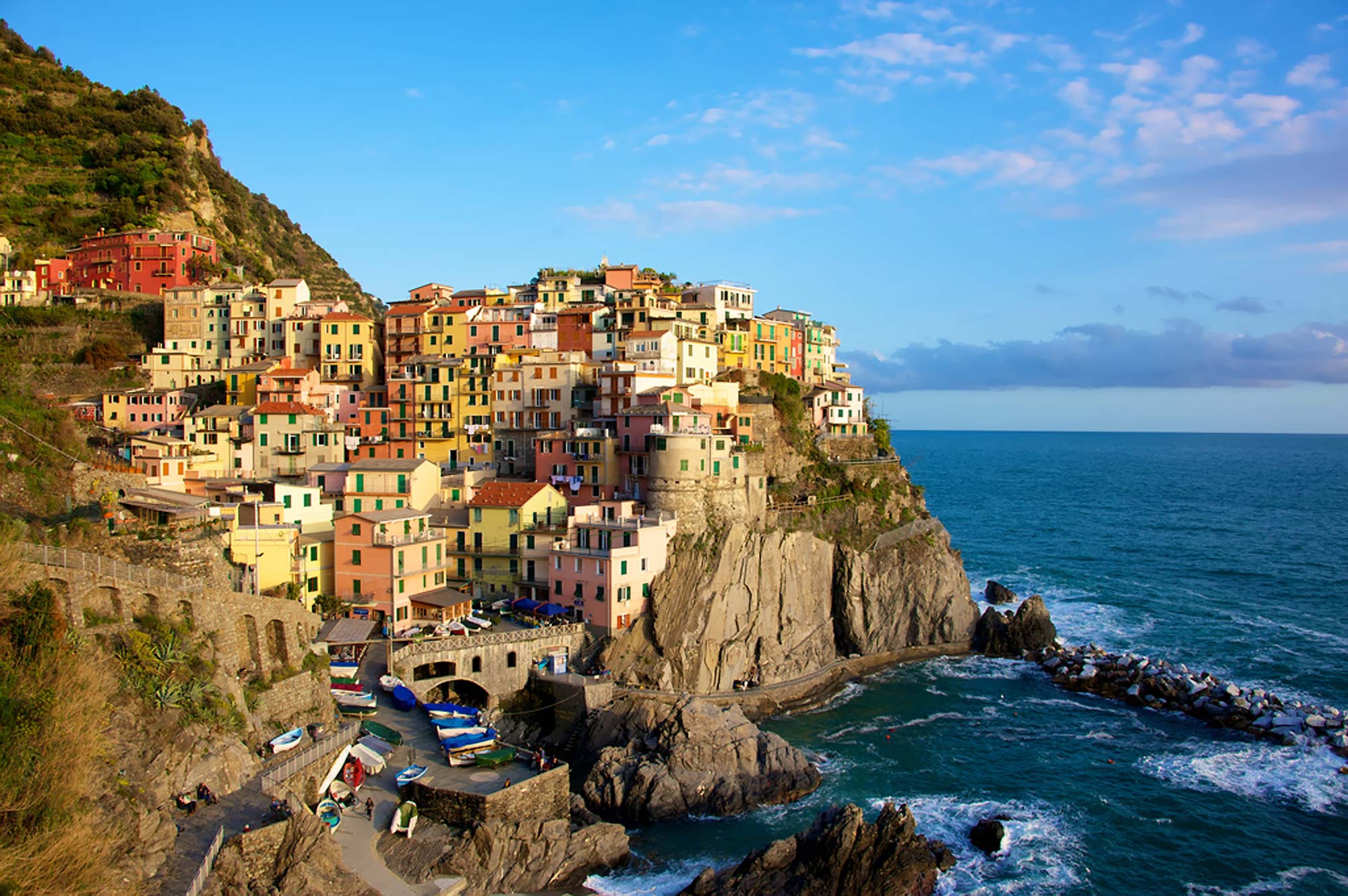 Wild, arduous but at the same time extremely beautiful. Maybe because they are one of the kind. This is what tourists from all over the world say about them. Every day thousands of them visit Cinque Terre, five small farmer and fisherman villages that are settled in the area of La Spezia. Not just during summertime: it is a like a pilgrimage that begins in spring and end in fall. Everybody comes to hike the path that unifies them, built on the hills that descend rapidly into the sea, from which you can enjoy a breathtaking view. It starts high up the hills and descend to the “cian” – the terraces, small portions of land used to grow vegetables, realized during the centuries – where the vineyards dominate, and it stops on the sea, from where the five small villages of Riomaggiore, Manarola, Corniglia, Vernazza e Monterosso al Mare rise.

Cinque Terre and their whereabouts were declared world heritage sites from Unesco in 1997. They took this title because of their perfect balance between nature and the action of the man on it, that has never ruined or damage the ecosystem of the territory. To preserve this balance and this natural world heritage it was founded the Natural Park of Cinque Terre and the Protected Marine Area.
The small houses that descend on the sea, the carrugi (narrow streets), the fishing, the terrace’s plantations, and the hills paths are the emblems of this landscape, a sort of living culture. The first of Cinque Terre is Riomaggiore. We have trace of its existence since 1251, when the inhabitants of the village of Carpena, a small hamlet in the area of Riccò del Golfo in Val di Vara, came down from the hills to the sea. It is a tiny village but full of treasures like San Giovanni Battista’s Church and Santa Maria Assunta’s Chapel. The next one is Manarola, which is well known for its seaside promenade the so called Path of Love (Via dell’Amore). The landscape of the village is characterized by the typical tower-houses. Mario Andreoli enriched its fame by creating the famous Nativity Scene, with 250 shapes lighten up and made of recycled materials. It brights up the hill from over 50 years. In the middle of the path between the villages you will find Corniglia, the only one of Cinque Terre that has not a direct access to the sea as it is built on a promontory. To reach it you must climb up a stair, the same goes to go down at the seaside. Vernazza it is consider by many the more suggestive of Cinque Terre. Maybe this is due to its cute harbour that recall the one of Portofino, or maybe it is because of its ancient castle, that rises on the sea right on the edge of the promontory. Monterosso al mare  is the last one, but not less charming. For sure is the biggest: it is dived in old town and the touristic Fegina’s center. This hamlet bewitched even the poet Eugenio Montale, who had its own house in the new part of the village. Who knows how many times he admired the famous Giant, the majestic statue in concrete that was built at the beginning of the XX century, that rises from stone wall. In origin the statue supported a shell-shape terrace.

← WHAT TO SEE IN THE BEAUTIFUL CAMOGLI