The Myth of the Ligurian Focaccia 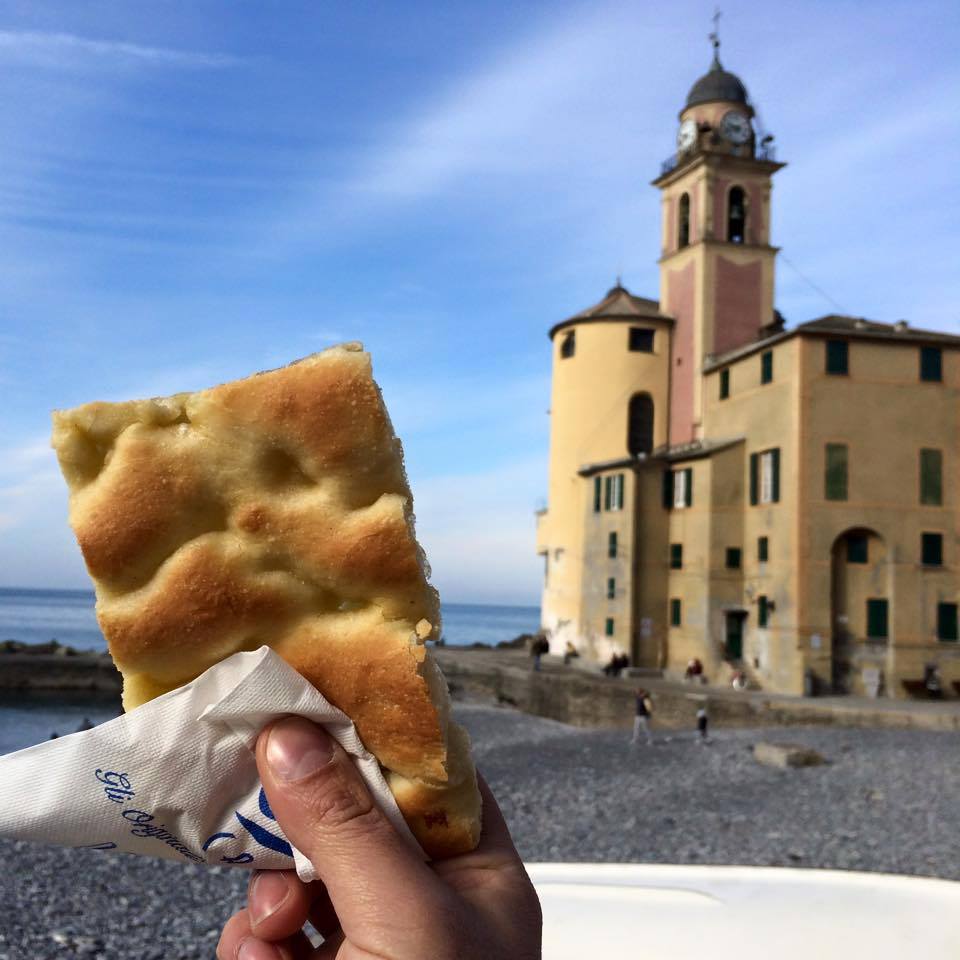 It has a beautiful golden colour, like a jewel. The perfume is unique and inebriating, it quickly surrounds you and it is so powerful that immediately will raise in you the desire to taste it. Without mentioning the flavour, that salty taste that is so unique to make everyone go crazy. You will discover that the tastiness can be found in less than one finger thickness.
This is the focaccia, a ligurian specialty, which fame has crossed the regional border as well as the international one: In Argentina, an historical destination for the Italian immigration, you can find a lot of bakeries in which it is produced, as good as in Genoa. Moreover its reminiscence is so rooted in the local tradition that the word fugàssa (focaccia) from the Genoese dialect it is a common term normally used among Argentinians and it is also the name choose for many bakeries. That should not be a surprise, because for ligurian people focaccia is like the sea: fundamental. It is perfect for every moment of the day: specially if you eat it with or even dunk in your cappuccino, it is the best snack for the morning or for an afternoon break and it is almost always present on the ligurian tables for lunch or dinner. It appears frequently on the buffet for the aperitif, to match the white wines of the region, another perfect union for the lovers of these products.
Focaccia is a very important aspect in the life of the inhabitants of Liguria, for those who decide to live here in no time it will become something that they will not renounce to eat. This could not be in any other way as for centuries the Genoese people and the Ligurian in general after have always brought it on their table. For a very long time it was the food of the lower class, the one that were settled next to the port, and for this reason it became shortly the breakfast for laborers and workers of the port. It was the food of the simple and humble people. Afterwards it was served during wedding celebration. It was common practice for the bride and groom to give it as gift to the guests as symbol of gratitude. Unfortunately this tradition went a little out of trail as the guests sometimes were more interested in the distribution of the bread than in the religious celebration itself, and for this reason the Bishop Matteo Gambaro forbade its distribution. Another middle age law forbade to cook it with dangerous sauces.
Even with this sort of hindrance of the clerk, focaccia has survived, arriving to this time in many delicious versions: with olives, with rosemary, with tomatoes and many others. It is also possible to fill it with what we like the most, for example it is very tasteful with Parma ham. Focaccia is the excellence of the Ligurian street food.

The traditional version however remains the most loved and requested. There are very few ingredients, just water, flour, olive oil and salt, but the difference it is all in the hand of the baker and in the cooking. It seems that the name comes from the ancient term focus, meaning fire, fireplace. There are trace of it since the first millennium A.D. , the document is an inventory paper that tells about the stone to cook the focaccia. To be properly baked it must rise for a long time – at least 8 hours- and it must have “holes” shaped by the baker’s fingers, so that the olive oil (made in the area as well) can stay still as well as the salt grains. The external part must result slightly crunchy and golden; this is a result that you can obtain just with experience. On the inside it must be soft. In its complex a good focaccia must not be more thick than one or two fingers.
It is necessary to follow these instructions to realize an impeccable product, else we are just talking about imitations. For this reason in order to protect and help people know the focaccia it has been founded some years ago the Producer Assosiation of the true Genoese Focaccia. The bakers of the area of Genoa have created a brand, that only the ones who produced this bread following the truthful recipe can be a part of it. There is only one exception that is rightly allowed and it is the Voltri’s Focaccia, a district in the west side of Genoa. Here this typical product is left to rise on trays covered in cornstarch. The pasta is kneaded as the traditional focaccia and in the end it is baked using a spatula covered as well in cornstarch. The result is special and unique, you must try it.
Another exception, even if it is better to say that it was established a record: on 27th July 2008 in the town of Borzonasca in Valle Sturla, it was realized the world’s longest focaccia. With its 807 meters it entered in the Guinness World Record, thanks to the hard teamwork of 3 bakeries. The pieces were joined together with a special kitchen glue, as the rules established, and put on trays all around the historical center of the town.

← Stella Maris in Camogli, the night of lights